Phred Adjusted Maximum Likelihood Decoding, abbreviated PAMLD, is a closed class decoding algorithm that directly computes the decoding likelihood from the base calling error probabilities provided by the sequencing platform and a set of priors for noise and the potential barcode sequences. As a result it can report the probability of an incorrect barcode assignment in SAM auxiliary tags for downstream analysis consideration. It can be used as a drop in substitute for the ubiquitous minimum distance decoding, increasing both precision and recall as well as noise filtering, without hindering speed or memory requirements.

PAMLD identifies a barcode from a list of potential barcode sequences by maximizing the posterior probability that the selected barcode was sequenced given the potentially erroneous sequence was reported by the instrument. The posterior probability is evaluated using a Bayesian equation that takes into account the conditional decoding probabilities for each potential nucleotide sequence, computed directly from the basecalling quality scores, and a set of prior probabilities. The prior probabilities, the expected fraction of reads identified by each barcode in the data as well as the fraction of indeterminate sequences (random noise), are either provided by the user using the concentration and noise configuration attributes or estimated from the data by a preliminary Pheniqs run that produces a prior adjusted configuration file. 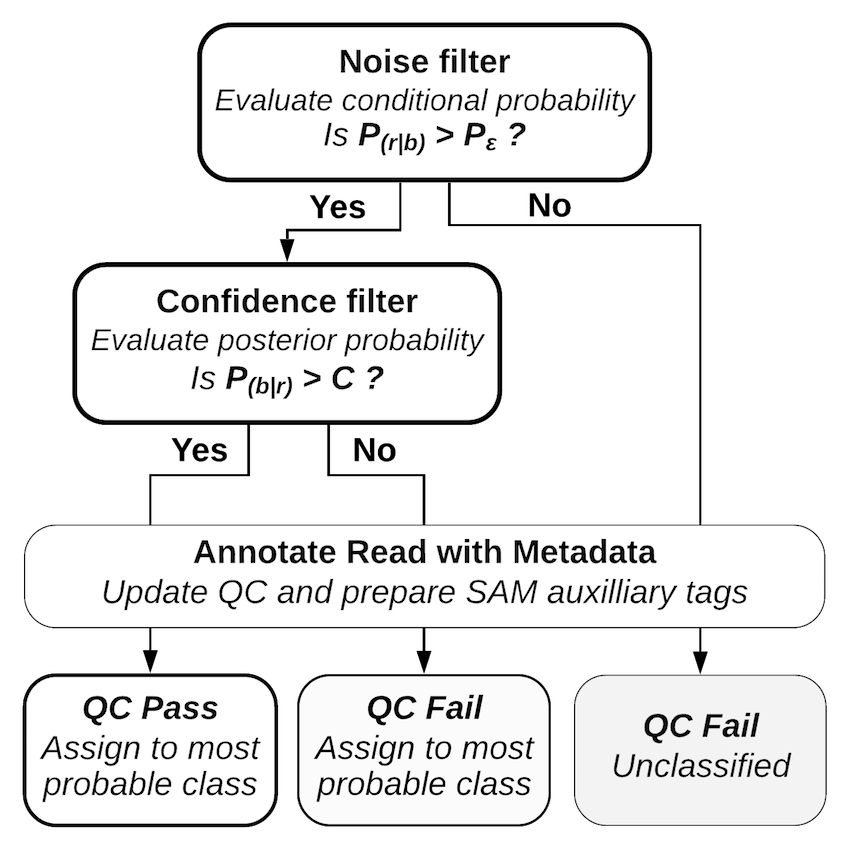 Decoding a read with PAMLD Reads with a lower conditional probability than random sequences fail the noise filter and are classified as noise without further consideration. Reads with a posterior probability that does not meet the confidence threshold fail the confidence filter; these reads are classified, but they are marked as “qc fail” so the confidence threshold can be reconsidered at alater stage. A full description of the mathematics behind Pheniqs, as well as performance evaluations and comparisons with other decoding methods, may be found in the paper. Pheniqs is designed to accommodate the addition of alternative decoders, which can be added as derived classes of a generic decoder object.

The dominant user configurable parameter is the confidence threshold, which is a lower bound on the decoding probability to declare a successful classification. The value of confidence threshold controls the tradeoff between false positives and false negatives. Barcode frequencies are specified in the class concentration attribute while the expected decoding failure frequency is specified in the decoder noise attribute.

When the conditional probability is lower than random barcode probability, the initial evidence supporting the classification is inferior to that provided by a random sequence, indicating that the maximum likelihood decoded barcode cannot be distinguished from noise. The noise filter considers those a decoding failure without further consideration, and the decoder subsequently sets the QC fail flag for the read.

Reads that pass the noise filter are evaluated by the confidence filter, which verifies that the posterior probability of the maximum likelihood decoded barcode is greater than confidence threshold. If the read passes the confidence filter the probability of a decoding error is given by 1 minus the posterior and reported in the appropriate SAM auxiliary tag, otherwise the QC fail flag is set. In the case of multiple combinatorial barcodes the error probability being reported is 1 minus the product of all individual barcodes of that type, since they are considered to be independent observations.

Directly estimating the posterior decoding probability allows Pheniqs to report intuitive classification confidence scores for every read. Deriving a confidence score for a combinatorial barcode, made up of several independent components, requires to simply multiply the confidence scores of the individual components. confidence threshold allows researchers to choose between assignment confidence and yield of classified reads.

Estimating the prior distribution

Once noise has been estimated, estimating the prior of each barcode is straight forward since we can rely on the high quality reads. For each barcode the estimated concentration is pf pooled classified fraction multiplied by the probability of it not being noise, which is 1 - noise.

When estimating priors for complex combinatorial barcode sets there are multiple strategies available. Pheniqs can decode all barcoding rounds in a single run, in which case the priors will be estimated in an unconditional fashion: every round will be estimated without accounting for the other rounds. This is the quickest but also least accurate estimation.

A different approach is to decode the first round and split the reads to separate files. The prior for the next barcoding round can then be estimated on each of those separate files and so conditional on the previous round. This approach requires multiple decoding rounds but estimating the conditional prior, essentially computing the Bayesian tree, provides more accurate results. The configuration inheritance mechanism makes this easier to script as shown in the fluidigm example.